We're excited to introduce a new feature today: we call it the "Middleman debt transfer". It's a simple way to settle up debts with people you don't see very often.

Let me show you how it works by an example:

Let's say Tom, Mary, and Peter goes out on a trip. Peter is Mary's friend, and Tom and Peter don't see each other very often.

After the trip, Peter ended up owing Tom $20.00. However, Peter doesn't see Tom much, so it's hard for them to settle their debts in person. 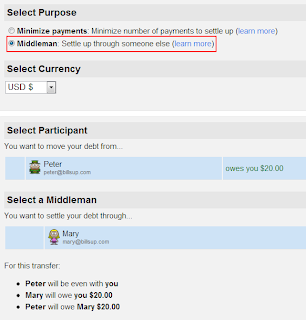 With middleman debt transfer, the concept is similar. We let you transfer your debts so that you can settle through another person (middleman). To use this feature, go to the transfer debts page and select a "middleman" debt transfer. Simply pick:

The current debt balances will be adjusted so that your debt with that friend you don't see very often can be settled. Meanwhile, no one loses money.

Cool? Enjoy!
Billsup team
Posted by Caleb at 1:49 AM